In July 1890 the Reverend Henry Kuppers from Coblentz Germany took up the position of the first resident Priest of Bo’ness. He entered the Seminary at the age of 40 and was now 45 years of age. Unfortunately, his term of office was short as he was recalled to Germany in July 1892. [I found him in the Glasgow Trades Directory 1890 -1891. Kuppers Hendry R.C.C.  resided at 17 Great Hamilton Street Glasgow. No details for him in 1892 anywhere in Scotland.]

I had the privilege of discussing with our oldest Parishioner at the time, aged 106 years of age, Miss Mary Baptie about the history of our church.  She explained that this was a photograph of the very first Priest of Bo’ness, which one, she was not sure. We thought it maybe the seated priest? The photograph was kindly donated by Mrs M Robertson.

1892 until October 1901 Bo’ness had no resident Priest and reverted to its dependence on Linlithgow. Despite many registered Catholics in the town the Church attendance was low. Ironically at this time it was felt that a Catholic school was needed as there were 112 children requiring Catholic education.

Section Four
We are now aware that 1892 until October 1901 Bo’ness had no resident Priest and reverted to its dependence on Linlithgow. Ironically at this time it was felt that a Catholic school was needed as there were 112 children requiring Catholic education.

Father Murphy from Linlithgow procured a site, but the funds were low, so no building work took place. 1901 records show a big increase in Mass attendance; this may be due to the influx of workers to the local industries which were growing at the time. This pressed the Archbishop to find a permanent Priest for the Parish.

Father Joseph Payne
Father Joseph Payne arrived in October 1901. He was a native of Lochgelly. His presence in the Parish gave it a new impetus. Funds were gathered, and the first Catholic School was opened in 1902.

The recorded Mass attendance was 250. Father Joseph remained until 1904.

I found the following article in the Bo’ness Journal dated Friday 15th January 1904.

We regret to hear that Father Payne of St Mary’s Roman Catholic Chapel has resigned his charge here, owing to continual ill health. Acting on advice of his medical advisors, he has gone to the Canary Islands to recruit his health. Father Payne came to Bo’ness in September 1901 just over two years ago, from St Patrick’s Church Edinburgh where he was Curate. Father Payne studied for the Priesthood at the Scots College in Rome. During his short stay in Bo’ness Father Payne endeavoured to put the mission on a sound basis and his efforts have been attended with great success. Under his charge he repaired the old Church at the head of Providence Brae which work was shortly followed by the building of the handsome new Chapel school at the corner of Bog Road and Stewart Avenue at a total of almost £3000 to which the congregation voluntarily subscribed the sum of £200.

Father Payne’s departure is much regretted, and he leaves with well wishes of his congregation. It is understood that an appointment will shortly be made to the vacant charge. Meanwhile Father Miley, Linlithgow is ministering to the wants of the Bo’ness mission. Father Payne was also a member of Bo’ness and Carriden School Board

However, in St Mary’s First Anniversary Parish Magazine 1900-1991, it is stated that Father Payne had been educated at Blairs College Aberdeen and the Seminary of St Sulpice in Paris. For the first two years of his Priesthood in France and then returned to Scotland to become Parish Priest of Bo’ness. [Did the Journal get it wrong again?]

Consecration Ceremony of the new School August 1902
The new school was crowded, the ceremony was performed by Archbishop Smith. The other clergy who were present were; Father Stewart from Montrose, Father Miley from Linlithgow, Fathers Williams and Kirkham from Lanark and Father Payne Bo’ness

The school opened its doors on September 1st, 1902. There were 147 pupils and three teachers. Helen, Elizabeth and Sarah Donaghy, who were presumably sisters, within weeks the school had recruited additional teachers, the school remained in use until July 3rd 1958. The Headmaster at the time, Mr Martin Fennie who took up a post at St Anthony’s in Armadale.

This now was the Church/School. There were 5 classrooms divided by glass partitions which were pushed back at the week-ends for Mass. When the school population increased the Sanctuary was required as a classroom and the Church returned to the League of the Cross Hall. 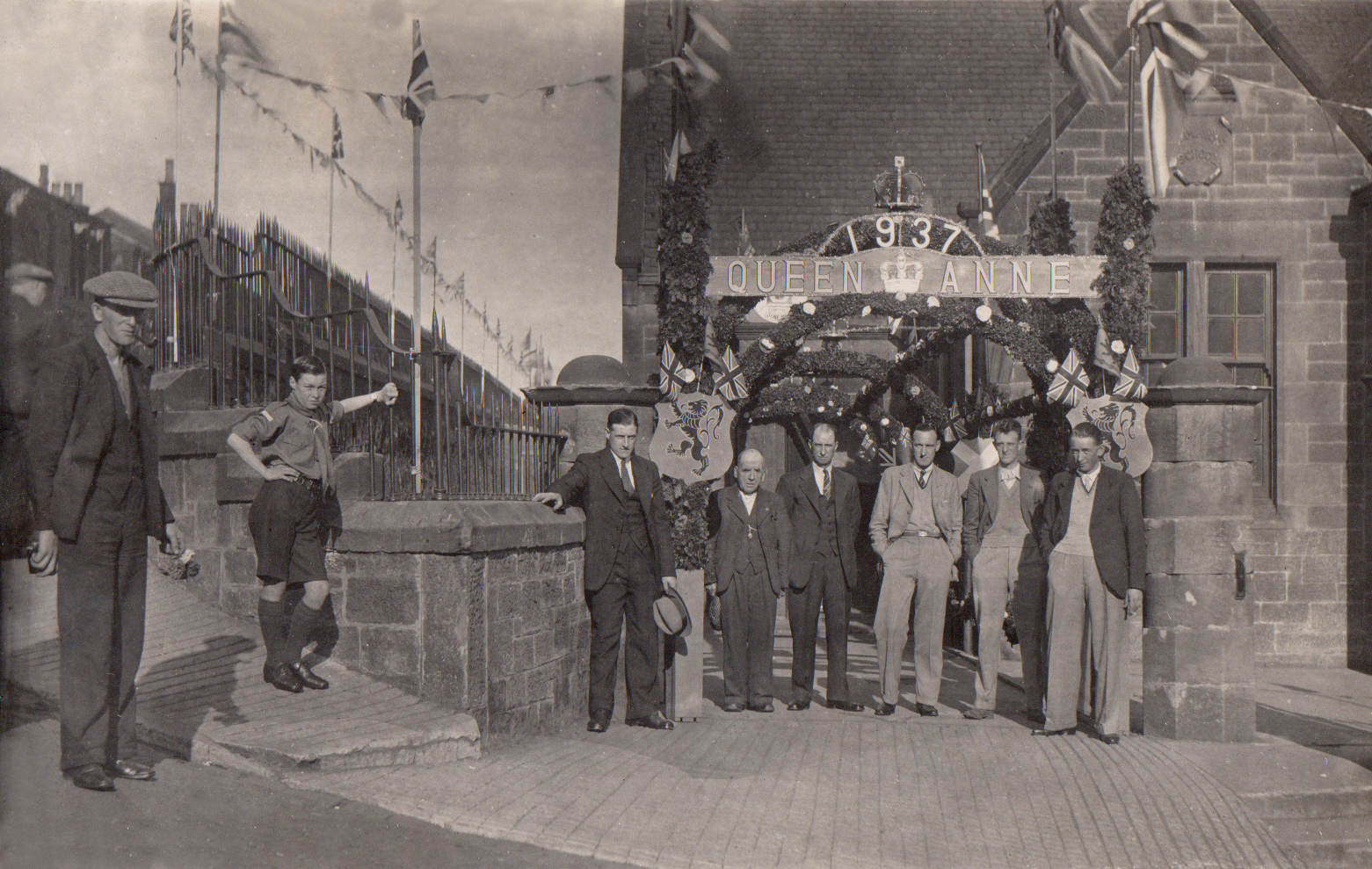 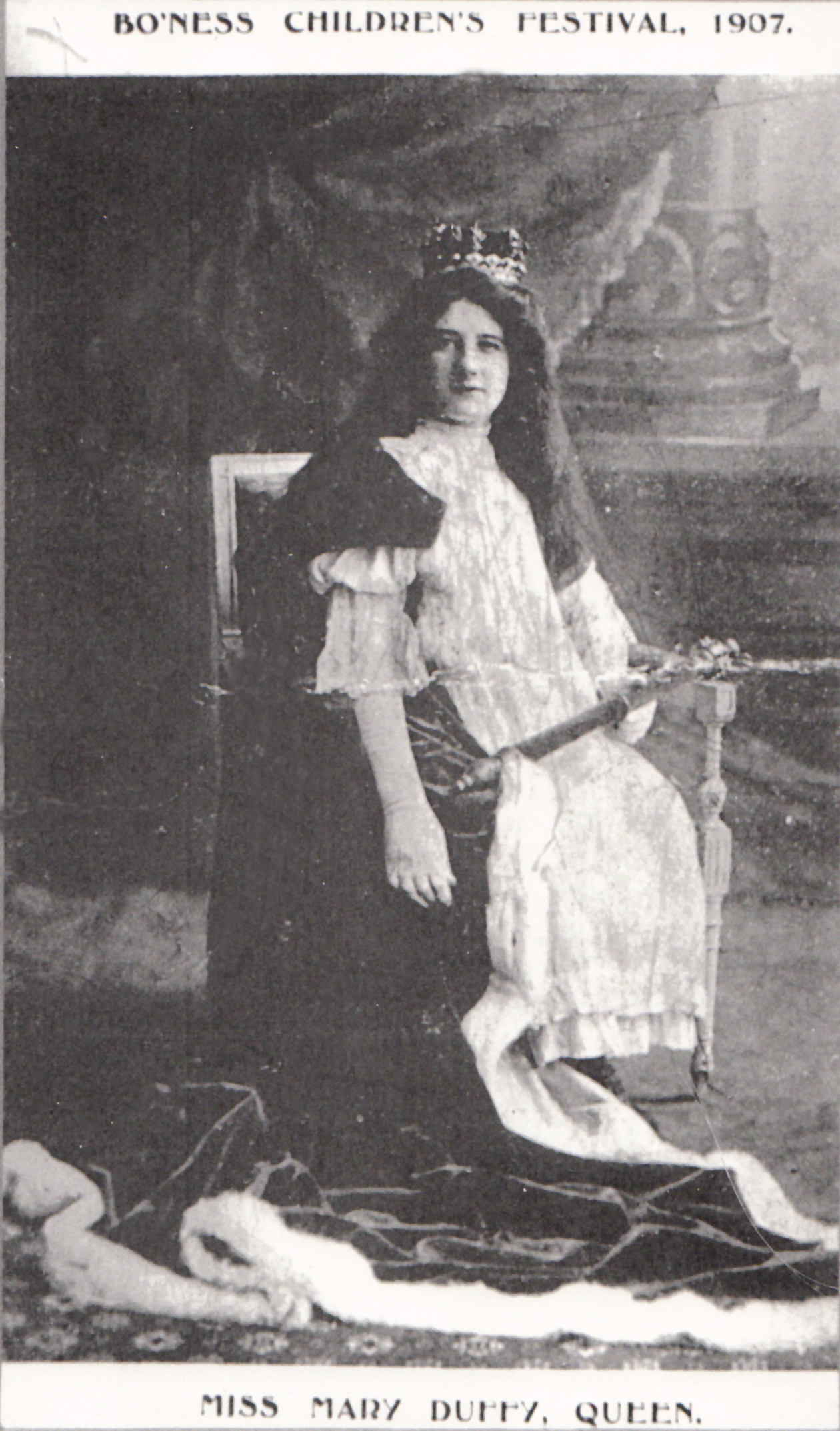 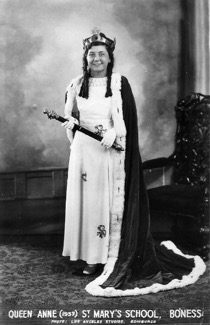 As you can see this photograph was taken in 1937 when Ann [Annie Spence] was crowned Queen by Mrs J.B. Ballantine. Mary Duff was the very first Fair Queen from St Mary’s school in 1907. The proud gentlemen in front of the Arch were Wm Martin, James Wilson, Tommy Docherty, Frank Butler, Andrew Liddle, Neil McAllister and James Lawrie.