The beginning of the Catholic Congregation of Bo’ness

The Catholic Congregation of Bo'ness began to increase due to the influx of incomers not by their own growth. Better days were dawning for the Catholics of the Old Port of Borrowstounness and surrounding Hamlets. They had passed through the turbulent times of the past and lived to tell the tale. The Catholics of Bo'ness now walked to Mass in Linlithgow relying on the services of the Priest of Linlithgow. Periodically they held 'House Masses' in Bo'ness to which as many as possible were invited. In 1886 times were about to change for the good Catholics of Bo’ness.

In 1886 the Bo’ness Parishioners rented a hall in Bo’ness and invited the Priest from Linlithgow to come and say Mass whenever he could. This situation continued until 1889 when the Parishioners were able to purchase the United Free Presbyterian Church on Providence Brae. This Church was called ‘The League of the Cross Hall’ which seated four hundred people. Built by the Bo'ness Burgher congregation at a cost of about £500 in 1796. [The galleries were inserted c1837]. 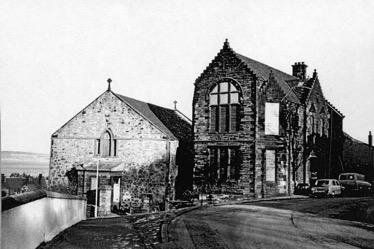 The Church on Providence Brae, was built as a meeting house for the Burgher Church in 1795. Simple rectangular building, rubble-built with ashlar dressings and angle margins. Additional porch at W with Venetian window above, central light pointed. S elevation with 2 tall central windows with pointed heads and Y tracery; outer bays with similarly detailed windows in ground and gallery. N elevation with similar central windows and smaller at E. East end, blocked door and Venetian window above. Slate roof.

Nisbet, mason, Edinburgh, had the building contract, and from start to finish he gave the greatest annoyance. The building adjoined the northern boundary of the parish minister's glebe,[now known as the Glebe Park]  Nisbet in his operations not only put his materials on the glebe lands, but without permission made a road through them from the north to the south. Just as the foundations were being laid the Rev. Robert Rennie, the parish minister, raised - and no doubt with reason - an action of interdict in the Court of Session against the managers. Fortunately, parties met at once and adjusted their differences, and so the first obstacle was removed. Under the contract with Nisbet the new premises were to be ready for occupancy in August 1796, but even in the end of September the building was hopelessly incomplete, although he had been paid most of the contract price. The managers were therefore forced to apply to the Sheriff for authority to finish the work themselves at the contractor's expense. This had the effect of making the defaulting tradesman bring the building to a speedy completion. But now came the greatest annoyance of all. Nisbet rendered a large account for extras. Payment was refused, and in 1798 he raised an action for payment in the Court of Session, before Lord Meadowbank. The case was fought by the Congregational Committee, consisting of William Henderson, merchant; Archibald Hardie, baker; James Buchan, merchant; and James Morton, smith. It is of peculiar interest to observe from the papers in the case that the advocate employed for the committee was Francis Jeffrey, afterwards famous as the editor of the Edinburgh Review, and latterly raised to the bench as Lord Jeffrey. He was then a young man of twenty-six and had only been two years at the bar. The case dragged on until the spring of 1799. We have not seen the final judgment - if there was such a thing. But in the proceeding July his lordship, in one of his interlocutors, wished the parties "would return to their original dispositions to behave properly and liberally to each other," so that we assume the matter was ultimately compromised by the parties themselves.

Our forefathers must have been so excited to have purchased the very first Catholic church in Bo’ness.  The following article was published in the Bo'ness Journal, on Friday, August 16th, 1889:

The build just acquired by the Roman Catholics of Bo’ness was opened and used for the first time for congregational purposes, when High Mass was celebrated. The premises were those recently known as the Institute Hall and formally belonged to the United Free Presbyterian Congregation of the town. On the build of the new U.F.P. Church, the old church building was acquired by Mr G.C. Stewart and after being held by him since as a public hall, has now been sold to the members of the Roman Catholic congregation and the building thus reverts to it’s original use as a place of worship.

Since the purchase was completed the Church has been internally renovated and done up to fit its new purpose. The walls and ceiling have been repainted and the wood-work varnished afresh. The formal high platform has been removed and, in its place, occupied by the Altar. A low platform surrounded by a rail and curtain rises from the floor, and rises in the centre, an additional step. On this higher platform stands the Altar which is a fine erection in white and gold and for the occasion was profusely decorated with flowers. The body of the Church has been fitted to suit the requirements of the congregation with kneeling boards

On Sunday the High Mass was celebrated when the attendance was large, the Church being filled. There were present besides those who belonging to the Church congregation, many townspeople, and many Catholics from Linlithgow and Falkirk. The Reverend Archbishop Smith of Edinburgh, preached the sermon, which was earnest and in tone, and impressive in delivery. His subject was the touching theme of Christ weeping over Jerusalem and foretold the destruction of the Holy City. Speaking of the goodness of God, he reminded those present of how good He has been to them in giving them this Church. Hitherto they have been without a Church in Bo’ness, but God had now given them one and if they were only attentive to the lessons taught in this Church and followed the instructions given, they would have many blessings. He trusted the time would soon come when they would have not only a Church but a Priest resident among them.

He then proceeded to exhort his hearers to be regular in their attendance at Mass and the general observance of their religion as Catholics. He concluded his discourse by solemnly warning them against the use of strong drink. He stated that he had six years’ experience of the Central Prison of Scotland, that in almost every case out of  hundreds that came under his observation, there he could trace their origin to WHAT!!!!.------ DRINK. If they had refrained from drink, not one of them would have come to prison. When once they began to indulge in that brutal vice, they lost all reason, they did not know what they were doing, they committed the most abominable crimes, which their ignorance would not excuse them from. He pleaded with them to give up that horrible practice, and to join the Temperance Society in connection with the Church-- The League of the Cross, to avoid as a pestilence the Public-houses and all drinking.

At the close of his sermon the Archbishop retired, and the High Mass was afterwards celebrated by the Rev. Cannon Grady, from Falkirk, who was assisted by two Clergymen, while the Rev. Donald Easson, Linlithgow, acted as Master of Ceremony. The music of the Mass was well rendered by the Linlithgow Choir and Miss Sayers, Roman Catholic Teacher, Linlithgow, performed the harmonium music very ably.